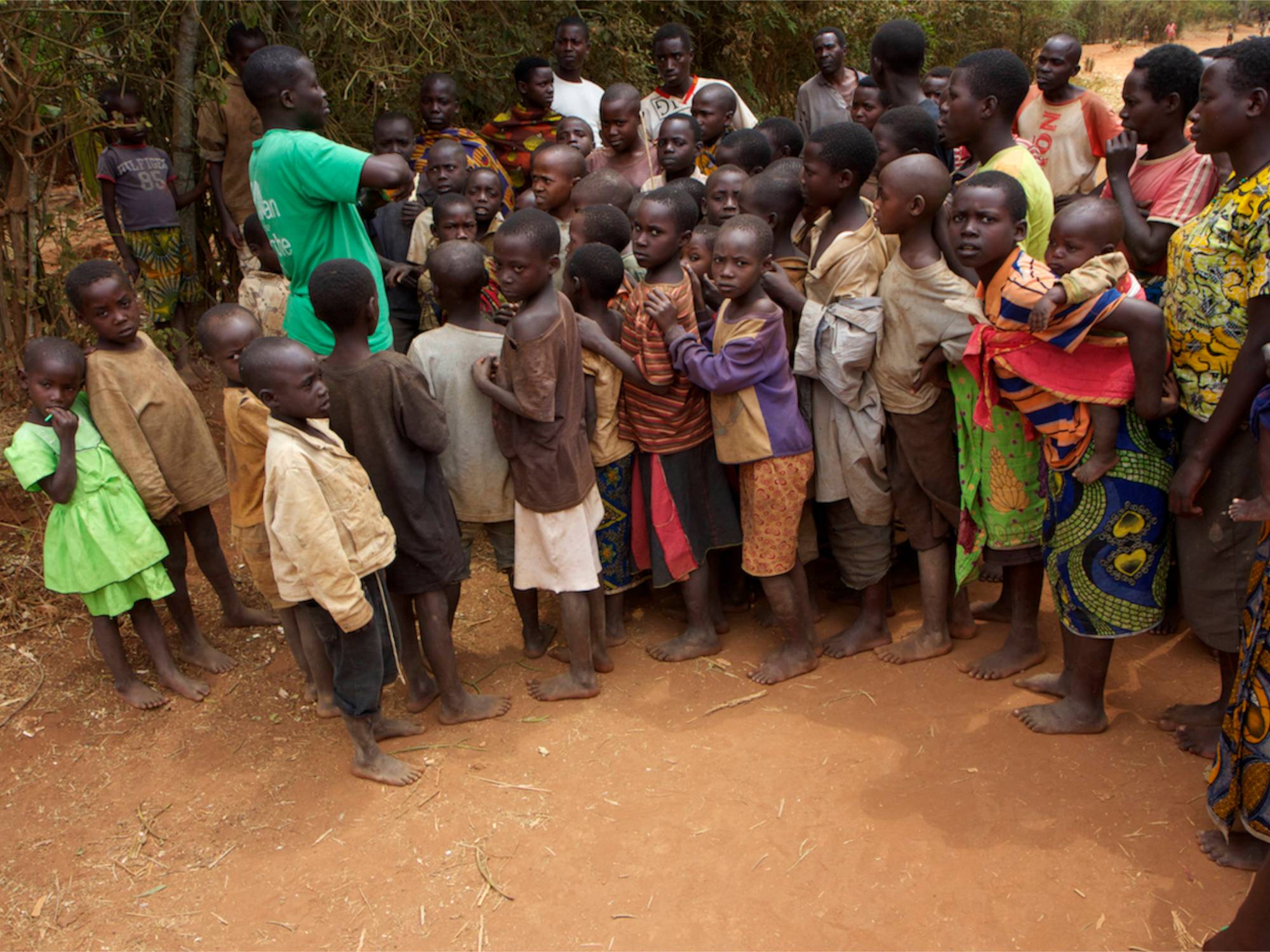 For the past 8 years, Harvest for Christ has sent out hundreds upon hundreds of young Africans to go out into the bush every August for 2 weeks and evangelize to the least reached people. E-mail updates are sent out every year telling stories of miracles and people saved. Josh and I have been following and praying for this outreach for years. This year, we got to be a part of it.

As we settled in to what would be our room for the next week, we applied bug spray, lied down on our blow-up therma-rests with pillow cases stuffed with our clothes and no mosquito nets and tried to sleep. Shorty thereafter, we woke up with streams of ants crawling around us, Josh rolled over and his face was right above a mouse turd, and were being eaten alive by mosquitos that were constantly buzzing in our ears. Josh and I proceeded to spend the majority of the night up with our solar lanterns killing mosquitos. At one point Josh squished a mosquito on the wall and a bunch of clear goop came off the wall onto his hand…he then proceeded to frantically question why there was goop on his hand. We laughed. When we woke up the next morning after about a solid 2 hours of sleep, we found a dead bat on the floor right outside our door.

We ate rice and beans with a slight ‘dirt taste’ to them for our solid 2 meals a day, braved the bathrooms, and hiked till we hurt. Sounds like a tough time, well it was…but it was one of the best weeks of our lives.

We were based in Kirundo, a very poor and needy northern province just near the border to Rwanda. We were a team of 15 who split into groups of 2-3 people each day to spread out around the province and share the good news! We began every day by singing Kirundi worship songs with our team and bible study. We ended each day with reports of God’s faithfulness and glory.

The week before this outreach, Josh and I were at home sledding down grass hills on pieces of glossy wood with the kids and Josh got a knick on his foot. This knick ended up getting infected enough that walking was excruciating…just in time for the outreach. Satan wanted him to stay back, to lay in bed all day while the rest of us went out and did God’s work. We prayed and prayed. Despite all this, in his pain he participated in 3 out of the 5 days with us, and the 2 that he missed, he prayed for the team all day. God is good. I ended up getting blisters on day one and by the end of the week, I was limping with a solid 4-5 nasty blisters on each foot and mosquito bites covering my body. But God is good.

We learned to be bold, we learned to be faithful. We preached the gospel to hundreds who would hear. We were humbly invited into mud huts, peoples homes, to pray over them and their families. We were graciously given little wooden chairs and straw mats to sit on while we spoke about the good news with families and whoever else from the community wandered over to hear. We preached to crowds of upwards of 40-50 people at once. When we asked if anyone would like to accept Jesus into their lives, hands went up! And when we prayed together, voices were heard! There were people who were so excited to receive Jesus, that they followed us the rest of the day and recruited people to listen.

Many people in these communities live in bondage as witchcraft is widespread. It is tough. And we did face a lot of opposition with those who were stuck on religiosity. But seeds were planted and hundreds of adults and children were saved this past week!Josh and I spoke together at a pub upcountry and were preaching to a crowd of around 50 people, many of whom were drinking alcohol. As I preached, hearts were softening. These people were searching. God had gone before us. They asked us: “what about us?” “we are drinkers!” Josh felt moved to respond, and with bold love he spoke: “Jesus died for those who persecuted Him. He died for those who nailed Him to the cross. He died for the liars. He died for the drinkers. He died for you.” One man among the crowd lifted his voice and said: “Those of you who do not want to pray, leave! We want to accept Jesus right now!” It was beautiful. In another pub where we witnessed, one of the men accepted Jesus and we found out that he was in the pub the day before telling people that somehow he needed to get saved. God is good.

One night, while debriefing with the team, a woman from the community had heard about our team and came to the house for prayer. She wandered back to where we were sharing, and when we asked her if she wanted prayer, she suddenly became extremely anxious, yelling and waving her hands around. It was clear that she was drunk, possessed even. We listened to her nonsensical concerns, but in the end she asked us to pray, still frantically moving around. We put our hands on her and prayed together. I had never been part of an exorcism before. She began to shake, and cry, but then slowly became silent as we prayed louder. God’s mighty hand of power and mercy was so evident. Afterwards, she was lucid and able to share her pray concerns and life story with us. Alcohol had ruined her life, she had multiple children from multiple fathers, and she was an outcast. But from us, she received love, and she received the gospel. We cast the demons that were oppressing her away in the name of Jesus Christ. A powerful experience.

Josh and I also saw the worst malnutrition we had ever seen. Little children with stomachs the size of basketballs, ready to burst. Sitting there sharing the story of Jesus, knowing that half these kids may not live past this next year. The fields were dry, water was scarce, and there seemed to be only roots to chew on. Many children and babies were covered in sores because they were not being bathed. This was overwhelming to see as the need is so great.

People are everywhere in Burundi. We always see people. But sitting with them in their homes and listening to them share about their lives, each of these faces has a story…has a soul.

This week has drawn us to love Burundi even more and has given us even more of a passion to do what we are doing.

Josh and I were only able to participate in one week of this outreach, but as we speak over 700 young Burundians are continuing to bring the gospel to every corner of this country. Some of the teams are on the road at 0500, hiking for hours and hours into the bush to bring the good news of Jesus where it has never been spoken before.

We had over 450 people commit for the first time to follow Jesus, in only a week’s time. Last year, there were over 20,000 lives changed, and right now, they’re on track to nearly double that number. Please pray for these teams, pray for their safety and pray for the people they are reaching out to. To hear some stories, and receive updates on the summer outreach, visit Simon’s blog at www.simonguillebaud.com

My feet still hurt. But it is a sweet sweet soreness…

4 thoughts on “Beauty in the Bush…”